Making them part of his family

I want the community to be proud of one of our very own citizens who fought for our country in World War II. 1 want to share with you a letter that was mailed to me and my husband, Al, from Mr. David Gleason. I thought it was so special and so fitting - not only to our family but to each and every one of us. Writing letters these days is a lost art in which 1 miss myself. I hope that you enjoy this letter as much as we did.  Al and Becky received the letter on Jan. 3, It came with a note from Gleason, Al's step father, which said, "I am sending to you a copy of the letter 1 sent to each of my children. Since you are now part of my family, I am taking the liberty of sending you a copy also." Now Al and Becky are passing it along to you.

Why would I send you a picture of myself standing beside a B-26 bomber? I am doing so in order to convey an important message. Shortly after this picture was made, we flew our new planes to England. Since our range was limited, we stopped in Maine, U.S.A., then on to Greenland, Iceland, Scotland, then to Coldchester, England. It took about three weeks to make the trip, for we could only fly in good weather. The first words spoken to us when we landed were, "Have you heard about the 322nd?" They were the first B-26 group there. They flew two missions. The first one, all planes returned to the base, but half of the crew were dead. The second mission was flown and all planes were shot down. We were advised that our group would fly the next mission. In order to give you a better understanding of the spot we were in, I will try to give you a quick word picture. Germany, our enemy had conquered all of Europe. Had won every battle, had beaten everything thrown her way, and was only 20 miles across the English Channel. They were winning the war; things looked very black. I knew that if things did not change, I would not last two weeks. I remembered my parents telling me that if I ever needed help, I should "pray." I promised the Lord that if he got me through the war, I would attend so many daily masses and communions. Now I do not claim that my prayers won the war, but I will say that shortly after this, things changed. We started flying at 12,000 feet and were escorted by British Spitfires. Our success greatly improved. I tell everyone that the Lord answered my prayers. As stated above, the day before I arrived, the Germans shot down every B-26 sent against them. The day after I left for home, they shot down 48 B-26s - the most we lost on any one day.

I am telling you of this part of my life, for you too will need help someday, just remember to "pray".

I am sending you a list of the original crews of the 456 Bomb Squadron that flew the Northern route to England (From Maine, Labrador, Greenland, Iceland, Scotland, to England.)

The picture of John D. Helton was taken with Generals Marshal, Anderson and Arnold. The Generals came to our base and were greeted by B-26 pilots in England at that time. Of course, all the Brass on the field wanted their picture taken with the General, but they said "we want to have our picture taken with the man who has the most missions". Thus my man Helton is in the picture. We came back to the States after the invasion. We had to go back. We came home a second time during the Battle of the Bulge. I do not know how many missions John had but it was well over 80.

Now I wish to tell you how I meet Helton. It was shortly after we arrived at Myrtle Beach, S.C. The higher UP's decided to experiment with our group. The pulled our co-pilots. They said the navigators and bombardiers were to be the co-pilots.

The day that this happened I was assigned to John's crew (Let me add that I had never been in a plane before the Army.). John told me to set in the co-pilots seat and keep my feet on the rudder petals until we came to the end of the runway. That I did. Old John would give the engines full power and down the runway (the runways were cut out of the forest). He would put in the trim and push on the rudder petals, but I'd push back. I was not going to let a Texan out push a boy from Mississippi. He would put more power one one engine in order to straighten up. As soon as the plane got off the ground, I would remove my feet from the petals. By that time both of us were scared for the plane would almost flip. We made about 5 take offs. All bad. John was asking his pilot buddies to check him out. All agreed that he was ok. I told all my buddies that they were letting everybody through flying school these days. My guy almost killed us all on the last 5 flights.

We soon had a discussion, I told him "remember you told me to keep my feet on the rudder petals until we got to the end of the runway." He then asked "which end?". I said the other end! He gave me hell. I advised him that I was hired to be a bombardier, not a pilot, not a co-pilot or a navigator. John and I were the best of friends. 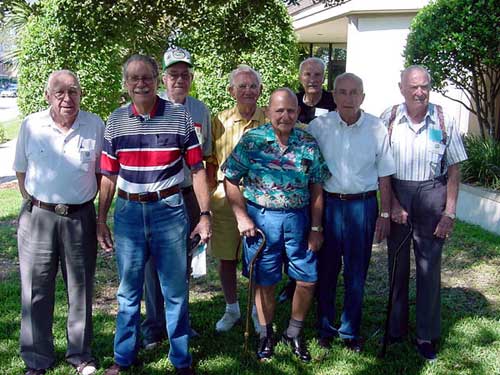